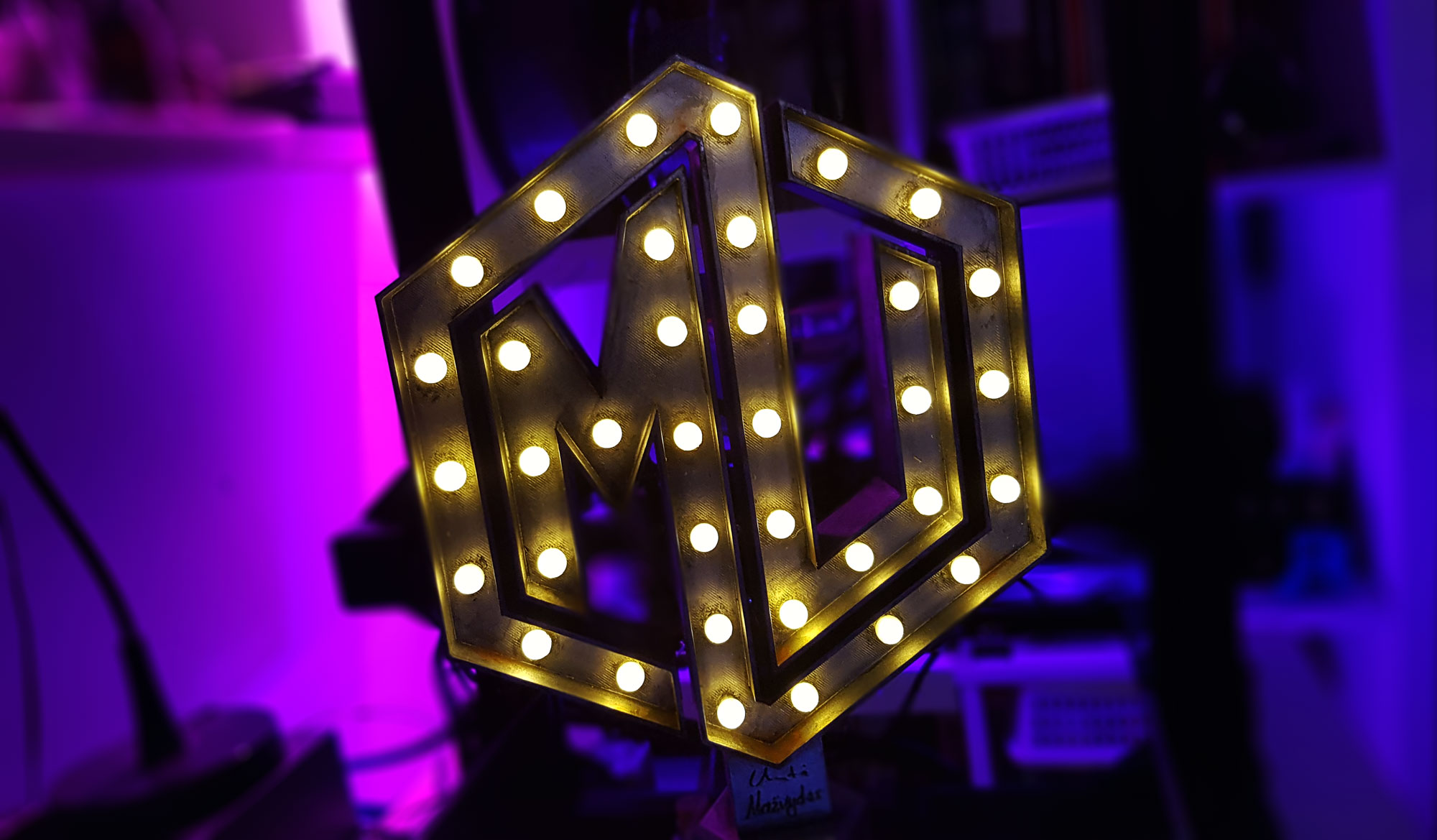 Ramblings on how I made my fiancees engagement ring 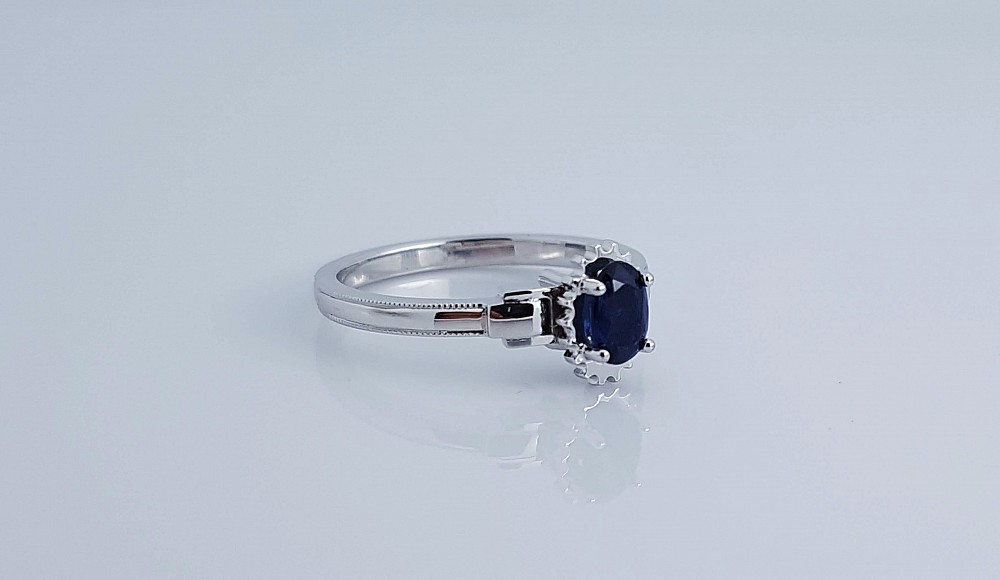 You know how when you're watching a YouTube video and after it finishes, you click on a suggested video, watch that, and then quickly find yourself going down the YouTube rabbit hole of weirder and weirder videos? At some point you say to yourself "why am I watching a half naked man in some forest building a hut by hand out of mud and straw at 3 in the morning?". Well, this wasn't one of those times.

It was probably 5 in the morning when my subconscious started banging on my brain, I tried telling it to leave me alone as I was preoccupied annihilating five poor souls alongside my friends in an online game, but the bastard was very persistent, didn't budge and kept annoying the living hell out of me. We lost the match, I blamed my stubborn subconscious that wouldn't just shut up for one second to let me focus and reluctantly I then went to bed.

It took me a few days of conversing with that part of myself to realize what it was trying to convey and it finally hit me.. Oh.. So it's time. Alright.. Oof.. I haven't done this before, where do I even begin? Why is this so complicated?? It's like Christmas, it should be full of love and happiness and joy, but it turns into a deep hole of despair, dread and fear, cowering wide-eyed in the corner of your room with the lights off telling yourself everything is going to be fine.

Well, it makes sense to start with the ring. My never ending pool of knowledge in regards to jewellery and specifically engagement rings is on par with my in depth understanding of not understanding anything about quantum physics. So.. Google? Sure, why not, let's take a look at what those rings even look like...

Really??? Why do people want engagement rings to look like they're straight out of a cheap pirate costume set? Is this really considered ... pleasant looking? And why diamonds? It looks like a piece of broken glass. Ridiculous... Why not have it be the persons favorite color? In Urtes case - blue. More digging required...

Alright, so it turns out if I want a special ring for my special woman, I can't just go out and buy it. Those jewellery shops that seemingly always have a 30% discount on everything might work, but the stuff they sell is the definition of generic and soulless, on the other hand the jewellery stores that serve champagne while you're sitting on a couch that costs more than your first car while you're brought rings on a cushion is just .. why?? I want a damn ring not an "experience". You go to Disney Land for an experience, or a brothel. Champagne is not an experience, it's just juice that's so far past it's expiration date it has started to bubble.

Custom it is then. 3D printing opened the flood gates for me into the world of 3D modelling, it's just that designing a ring is so outside the scope of what I usually model, the relationship between an engagement ring and a DnD dice tower has an ocean and a half separating the two. Nonetheless, either I make that work, or I have to resort to the perpetually 30% off ring or be forced to drink expired juice, neither of the latter I find appealing.

The biggest challenge now is joining our two different worlds together into a ring we both can appreciate and for it to symbolize how those different worlds come together. My tech focused, cyberpunk inspired world clashes with her stupid dragons and magic and dungeons and inefficient steam powered contraptions. To be fair, dragons are pretty cool, but we're not making dragons here, we're making an engagement ring, pay attention to what I'm talking about.

I could wrap that stupid dragon on the ring, or go berserk on many small details that would require an electron microscope to see, instead I decided to infuse a nod to her world with what would be considered a classic engagement ring. But where to begin? Well, this is where the biggest cosmic "you asked, we delivered" moment of my life came through.

Literally the day before going to visit my relative Donatas Andrijauskas - a very talented jeweler who eventually made the ring, we received a package. Urte enjoys taking part in international gift exchanges, this time it was a DIY tools & materials exchange, and for reasons unknown, I kid you not - someone sent us ... a ring size measurement kit. If I were a god fearing person, this would've been that cult starting moment. Within minutes I knew her exact ring size, all I now needed to do was to actually design the ring. Right ...

Donatas came up with great ideas and also gave me an understanding of what works and doesn't at a scale I hadn't dealt with yet. We drew a few designs, discussed limitations and possibilities, comfort and esthetics, shape and proportions. Slowly I began to imagine that ring, it started taking shape in my mind, but it was blurry and not fully developed, so I took what we sketched out and started working on a 3D model in Fusion 360.

Now, the three of you reading this who know what Fusion 360 is might be asking yourself - why is he using CAD software, specifically Fusion 360, to design an engagement ring? Ah, that's a great question. You know how sometimes you buy a product and it is incompatible with everything you own - it has custom screws, custom mounting, custom cables and everything is pretty much custom, barely a single off the shelf standardized component? Some people call that "innovation", but the correct term is lazy engineering. Instead of using tried and tested solutions, you disregard all of that and just make it up as you go along doing most of it ass backwards. That's exactly what I did.

Having over a decade of experience in programming, I was able to apply some of the key principals I learned along the way to 3D modelling, one of which is the iterative design process. You start from a primitive basic working concept and then keep adding things here and there, refining them, tweaking the little details, sometimes even deleting everything and starting from scratch, and doing all of that until you're happy with the end result. Well, I didn't do any of that, I just winged it and was done with 90% of the design in less than an hour. 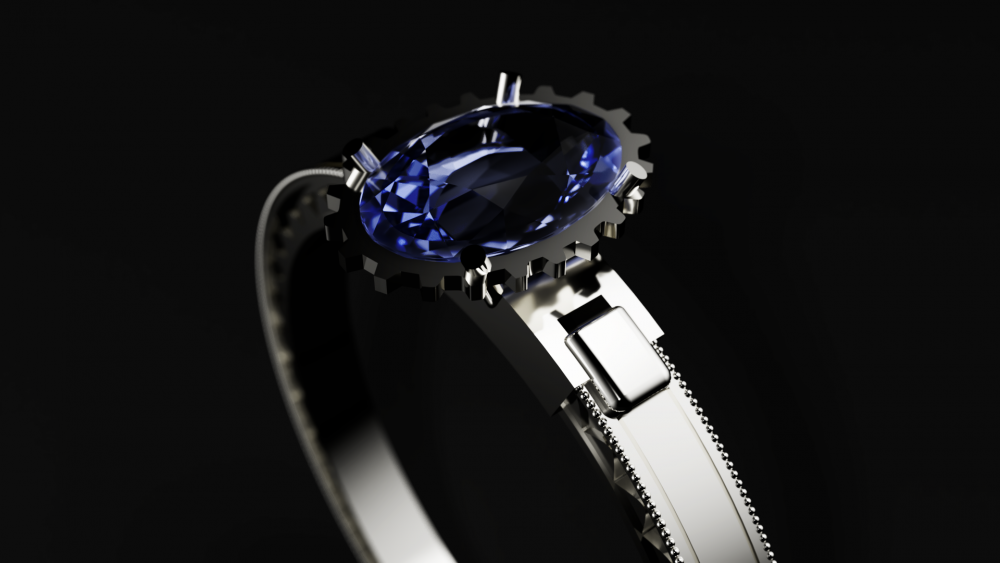 The next part for me was a ... strange experience, in an awesome way. From the first model we ever designed and printed to the models with much more complexity we're making now - every single time seeing it materialize, then picking it up and interacting with it gives me this weird feeling, James May calls it the "fizz" - an unexplainable sensation only we individually can understand. I keep finding it strange that you can draw a few lines on your computer, take a few measurements, put those in, pass all of that to the 3D printer and a short time later you're holding that thing in your hands. Every time I make something simple like a lid with a thread that screws onto something, or a hole is just wide enough to fit a bolt I measured - it's like I'm a kid and it's Christmas morning, the feeling doesn't go away no matter how many things me and Urte have already made.

But what a feeling it was seeing the ring I designed come to life before my eyes by the hands of an amazing craftsman. The process seemed so simple, yet so daunting filled with immense precision, microscopic attention to detail and the complexity of the materials and their intrinsic properties added more to my amazement. The simple fact that most metals work harden was something I discovered while being bored out of my mind in school bending paper clips, but Donatas knew when it was time to anneal, when it was time to work the materials, the distances, the scale, the overall picture... He had all of it in his head, while I was staring and trying not make a fool out of myself by asking too many dumb questions.

The process was mesmerizing to say the least, slowly a few bits of metal started forming a home for the deep blue sapphire. What felt like minutes turned out to be hours. I never thought about how much work goes into creating a ring from scratch and how involved that process is. It's sort of like bread, you want bread - you go to the store and you buy that bread, you never think about how it's made. Every time it looks the same, it smells the same, it tastes the same, it's great. Try making that at home, try making two identical loafs of bread and you'll know what I'm on about. 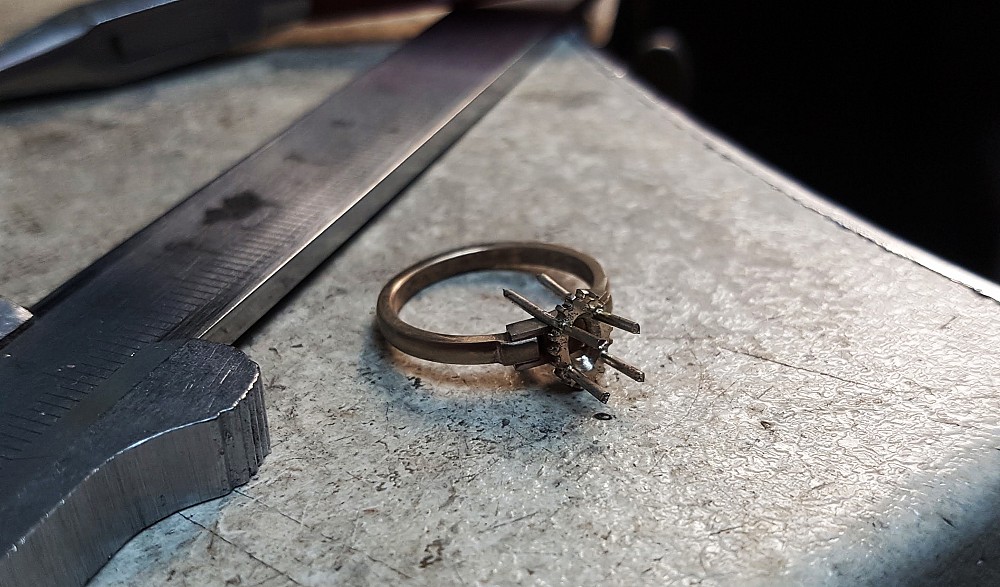 It was when the ring itself was done, when all that was left to do was to seat the sapphire, Donatas handed me the ring to have a look at it. The feeling when I held that nearly finished ring cannot be put into words, concepts, sentences, books or finger paintings, it was like beating a boss in a game at the hardest possible level - all of the trials you passed, the hurdles, the struggle, the failures, and finally it was over, all of that was gone, what's left is joy, happiness, calmness, and that's what I was feeling and more at that point in time. I knew that fucking finally, for probably the first time, I had made the right choice in my life, without any doubt or apprehension - I chose the right person. I cannot tell you why I felt that while holding that naked ring in my hand, but it just hit me like a train, full of butterflies, unicorns and those stupid dragons. 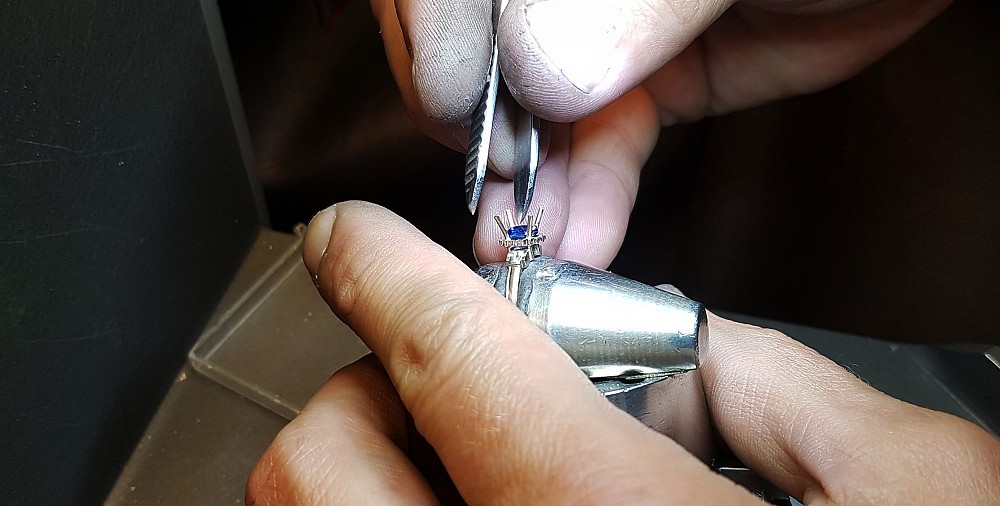 It didn't take long for sapphire to finally rest in its new home, and after a bit of polishing and electroplating - it is done, from hand drawn sketches to a 3D model and finally to a finished ring. The sapphire now has a home, the ring is done, comfortably waiting in a box and all that is left now is to give it to the person it was made for. What seems like an end to a journey is only the beginning to something more. I don't know what that "more" is right now, but I can't wait to find out.